The De-Evolution of the Hearse

Hearse: Pronunciation: \ˈhərs\Function: noun: Etymology: Middle English herse, from Anglo-French herce harrow, frame for holding candles, from Latin hirpic-, hirpex harrow
Date: 14th century
1 a : an elaborate framework erected over a coffin or tomb to which memorial verses or epitaphs are attached b : a triangular candelabra for 15 candles used especially at Tenebrae
2 a archaic : coffin b obsolete : bier 2
3 : a vehicle for conveying the dead to the grave (Merriam~Webster)

What was once an elegant mode of transportation for the deceased to be toured through public to their final place of rest has in modern times taken an almost antiseptic, sterile appearance. Much of this maybe due to many factors, one, death is something no one likes to talk about in this day of modern medicine and increased life spans due to science and people becoming more health oriented. There is nothing wrong with this attitude, but death still remains a reality reminding us of our mortality even though it is often a subject many do not like to broach.

As I shared before about Funerary Violinists, this wasn't always so, death was a ever present reality and society's approach was much more about tradition and mourning was considered a reverent act. During the Victorian Era it is no small wonder that Hearses were much more decorative and painted somber black, drawn by black horses such as this hearse that carried Lincoln's body. Vessels of mourning, ornately carved with large glass windows revealing the casket of the deceased, these carriages were works of craftsmanship and art.

It was in the early 1900's that hearses began to become horseless. In Paris electric hearses arrived first on the scene followed by petrol powered ones here in the U.S. These early models still retained the somber trappings of elegant grief and of course were very expensive. Due to the cost of a single hearse it was not uncommon for funeral homes to actually share one hearse between themselves such as this 1916 model. The hearse retained a certain dignity and this sense of artistic design carried on for many years as emulated in the 1930's by Packard and Cadillac. 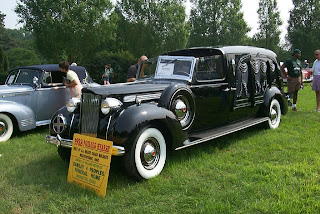 In the 1960's Hearse still remained distinctive but gone was the sense of ornate style most likely due to it being more efficient to modify an existing model of a Cadillac than to build a specific design. It was also during this time this model of hearse doubled as an ambulance also known by the slang term the "meat wagon". Today hearses are modified from an existing model, below is a clip from the History Channel giving a brief history of the hearse and how it is made today.


Though the hearse today has taken on a sterile appearance, the aesthetics of the early hearse are not forgotten by some such as this classic hearse that has been restored and modified by an owner in Whitby Scotland. 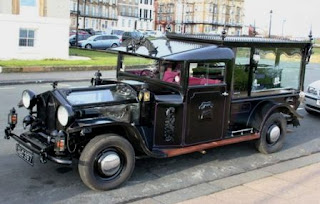 There are also many hearse clubs such as The Black Widow Hearse Club and others that want to keep the history of the hearse alive and at bastardrat.com they have built a horse drawn hearse from scratch. In today's society we have so many wonderful advances but often I find myself wondering is we are not becoming aesthetically void by approaching the minimalistic craze that is so often seen in modern architecture. Where once everything from buildings and automobiles took on such a distinctive character that they almost became an entity themselves to a now today's colder more impersonal feel. This could be why genres like Steampunk have surfaced to make the impersonal, personal again.

Posted by Professor Pym at 8:34 PM

Other Sites of Interest